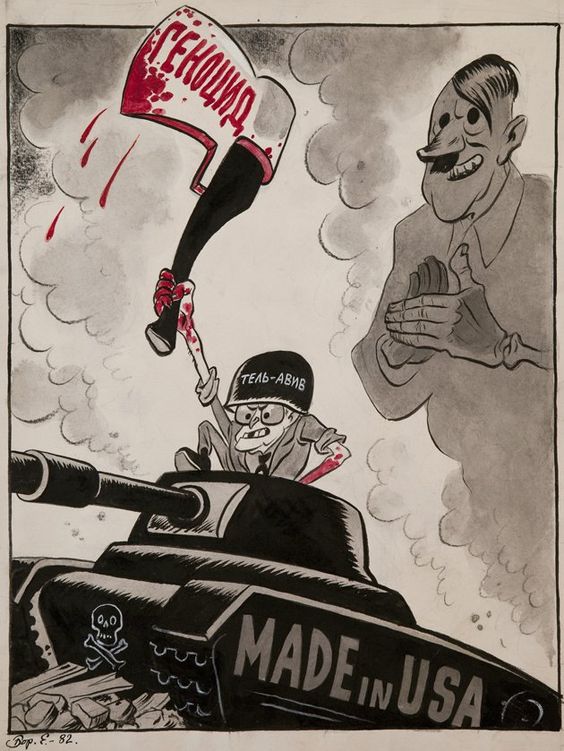 Jewish Anti-Semites, Hitler’s Jewish Relatives, and What is the guiding Spirit behind the State of Israel

The cartoon above would not be possible today. It was drawn in the 1960s, in the era when both the veterans and civilian survivors of the War, capitalized, were alive, some were still young, their memories fresh. It was drawn at the time when the North American Jews have not yet monopolized the business of the Holocaust. In the fact, the term itself, like the giant fake of Holodomor (Kholomodor) has not yet been coined.

The fairy tale of Holodomor was manufactured at Harvard, and the holocaust industry sprung up in America around the same period, in the 1980s. Both business projects were still dormant in the 1960s, their founders looking for startup capital.

The cartoon is self-explanatory. The homicidal intelligentsia-looking maniac’s helmet has an inscription on it: Tel Aviv. This is the state of Israel. The ax the murderous thing is wielding has the word «GENOCIDE» written on it. It’s blood-soaked. The tank with the skull and bones on the front plate is made in (the) USA. And the inspiring spirit of this all is gleefully smiling behind.

By the way, the image fits today’s artificial statelet of Ukraine as well. You’d just have to change Tel Aviv to Kiev. Even the ethnicity of the driver is the same.

The other day, Sergei Lavrov, the Russian Federation’s Foreign Minister dared to say something out of the ordinary. In fact, he said something extraordinary. But only in a way of what is permissible to be talked about publicly because the breadth of topics we can discuss openly has shrunk to laughably microscopic proportions. And Russia here appears to be one of the freest places on Earth, the EU has reverted to the darkest age of speech tyranny. The Third Reich itself may have in many ways been a free speech heaven when compared to its direct and freakish descendant, today’s EU.

So what did Lavrov say?

Lavrov mentioned that some Jews are anti-Semites and even Hitler is rumored to have Jewish ancestry. This caused a storm of fury amongst the righteous Semites. Indignation amongst the beneficiaries of the Holocaust geschäft was most apparent and, let’s face it, from their standpoint the displeasure is both understandable and comprehensible.

But Lavrov did not reveal any secrets and he cannot be an anti-Semite. Not in Russia, he can’t. Russia is a country, not quite a nation, where you cannot just climb the career ladder without having Jewish connections, and which has been run by Jews since the year 1917, milked by Jews, owned by Jews, where most Bolshevik and Communist murderers were Jews, where with a few notable exceptions all the current oligarchs are Jewish, where some key officials like Kudrin, the head of the Accounting Chamber, are a passport carrying Israelis, and Zhironovskii (Zhirinovsky), the principal and alas recently deceased anti-Semite-in-chief was also a Jew. Where official Kremlin propagandists are Jewish and the so-called opponents of the regime are for the most part Jewish as well. To be accused of anti-Semitism in today’s Russia while holding a post of any value or significance is the same as being accused of being anti-Semitiс while being on the board of AIPAC.

Lavrov did not say anything everyone around didn’t already know or took for a fact. The (American) History magazine published an entire article on Hitler’s Jewish, Semitic, and North African genes.

Lavrov didn’t even talk about Hitler’s grandmother, a Moravian Jewess, there a veritable cottage industry based entirely on Hitler’s Jewish relatives has sprung up in the recent years, complete with organized «heritage» tours in and around places of the last residence of those much-esteemed people.

Newspapers in the transatlantic Fourth Reich, where the theme of Hitler’s Jewish origin is more repressed and subjected to more intimidation than is the topic of homosexuality in the current Russian Federation, even they write frequently and with relish about this subject , albeit they must accompany everything with the expected lipservice to imaginary neo-Nazi sympathizers and furnish other foolish disclaimers but they write about the subject, squeamishly, nonetheless.

To be honest, by now most Russians find this never-ending Jewish spiel irritating. The stench from some representatives of this alien tribe, like from the vile scumbag Zelensky, for one, is overpowering and the harm he and his invariably Jewish coterie is inflicting upon the rest of the population is far more significant than the quantitative presence of members of his tribe among the unfortunate us.

By the way, why the Russian Plan A failed in the Ukraine is directly related to this “issue”, as I’ve described, somewhat delicately, in an article dedicated to its failure.

The words of the great Lavrov offended the local Judeo-Pygmy Minister (and no, I have no prejudice towards Africans in general, towards Pygmies in particular, and I honestly, am not a racist, unlike the leadership of the State of Israel and «people» like Zelensky and his ilk). His words offended the Israeli Minister not because of what Lavrov said may be false or true, but because he touched upon perhaps the second most sacred thing for every tribesman. The first one is his wallet of course. And the second one is the ongoing spiritual connection between Adolf Hitler and Nazism right from the genesis of the State of Israel, as well as the similarity between how the Nazis conducted themselves toward the Untermenschen and how Tel Aviv has behaved throughout its existence. It is also the reason why Israel supports Neo Nazis in the Ukraine. After all, many of them are Jewish Nazis.

And this spiritual relation, the holy trinity right of the USA, Adolf Hitler’s Nazism, and aggressive Jewdom as exemplified by the racist and genocidal state of Israel is reflected in this old Soviet caricature. Drawn by a Jew, no doubt.